Consignment store climbs to the top 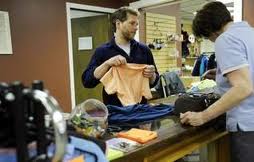 Consingment store climbs to the top

WEST ASHEVILLE — Four partners founded Second Gear with a simple idea — make outdoor equipment affordable.
The store sells used outdoor equipment on consignment, stocking anything from shoes to kayaks.
The business started slowly but has grown 20-40 percent annually since it was founded in 2004. The store has sold 2,600 items on consignment.
“It's expensive to buy new,” Second Gear co-owner Russ Towers said. “That was the genesis of the store. There was so much stuff to do in Asheville (that requires outdoor gear).”
The store started in a small space in West Asheville. It moved across the street into a larger store in 2008 and recently completed an expansion, giving the store a total of 3,550 square feet of retail space.
“We basically maxed out across the street,” Towers said. “We maxed out here. We knew we had to expand or go home.”
Similar to hunting
Lela Winton, of Asheville, has been shopping at Second Gear since it opened. She is addicted to buying and selling outdoor equipment, always looking for the perfect bargain.
Winton really likes to buy shoes, but she also looks for outdoor gear and jackets, preferring to shop at Second Gear over a traditional outfitter.
“It's more like a hunt,” she said.
Winton likes the additional space, and so did her young son. The extra room has allowed Second Gear to set up a tent on the floor. Her son enjoyed himself by crawling in and out of the tent, making it a toy.
“We are going to have to remember to bring a tent when we go to the beach next week,” she said with a laugh.
Towers said the store has a loyal customer base. Regulars come into the shop on a weekly or even daily basis and look for new items.
People on vacation also visit the store. Second Gear has fliers in the Chamber of Commerce but also has a strong Web presence.
Chris Mullen from Wisconsin was visiting his aunt. He browsed a rack with bike clothes and selected a shirt that fit.
He plans to participate in an annual bike ride in Iowa over the summer and needs equipment.
Mullen said he was amazed at the selection and prices.
“I like it,” Mullen said. “I have not seen anything like it before.”
Changing seasons
Towers had business experience and the entrepreneurial drive to open a store. He teamed up with a couple of former Outward Bound instructors. They had the expertise in outdoor gear. The partnership worked.
Shortly after the original store opened, the outdoor community embraced the idea.
But the store evolved. The partners originally figured the store would sell bikes, backpacks and other outdoor equipment. They were surprised that clothing became a huge part of the product mix.
“Think about your closet — you have a lot more clothes than bikes,” Towers said.
The business was cyclical in the early years. The store did really well in the spring and summer, but winters were a slow period for the partners.
“The first couple years were like that,” Towers said. “Winters were tough. (But now) we have some solid growth.”
The store moves different items onto the store floor as the seasons change. The shorts and T-shirts are out in the spring and summer and winter coats and gloves in the fall and winter. Besides the used consignment items, Second Gear also stocks guidebooks and maps. Towers said the items “fill in gaps” in the merchandise.
Part of the community
Second Gear has three employees besides the partners, who work part time at the store. Towers said Second Gear is more than a business. It is part of the community. The business sponsors numerous events and fundraisers, often providing gift certificates or store credit.
“The mission from day one was not to just make money but to be a part of the community,” Towers said. The store expanded for three reasons, Towers said. For starters, the store was packed.
“We had products that we could not get onto the floor,” he said.
Also, the space was available and sales growth was strong.
Towers has been pleased with the expansion.
“April is going great,” Towers said. “As soon as we opened up there was this rush of stuff.”
He added, “It flows, but we still have room to grow.”