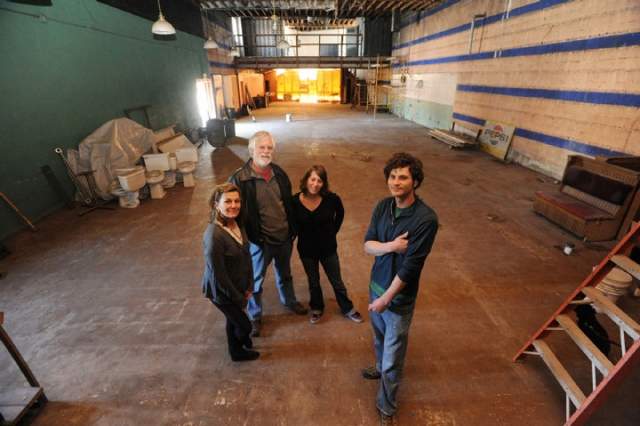 West Asheville — The old Isis theater on Haywood Road hasn't screened a movie since 1957, when Dwight Eisenhower was president, gas was about a quarter a gallon, and “I Love Lucy” was still running new episodes on TV.
But the Isis, at 743 Haywood Road, is poised for a big comeback. The old building is getting a major renovation by owner Scott Woody, who plans to reopen it later this year as a music hall and restaurant. It's the latest development along the busy Haywood strip, which has seen such new players as the Altamont Brewing Co. taproom and the Get Down music room, Ritrovo Pizzeria, the Anam Cara theater and the expansion of Harvest Records.
Woody is restoring the Isis name to his building, but beyond that, it's a work in progress, he said. “The plans have not been completed,” he said. “But it's an old movie theater and a natural environment for a music hall. The shoebox shape has excellent acoustics.”
The new Isis would include indoor and outdoor seating, he said.
The Isis would be the city's third old movie house to get a second act. The old Merrimon Twin theaters became Asheville Pizza and Brewing while the downtown Fine Arts Theatre was reopened as an art cinema. Most of the city's old cinemas have fallen victim to the wrecking ball.
A veterinarian by trade, Woody is also an accomplished bluegrass musician, so he's thinking about acoustic music for the new Isis. “Anything in the genre of Americana — jazz, bluegrass, old-time, maybe even some blues, but not limited to that,” he said.
The revival of the Isis is good for West Asheville, said Lu Young, owner of the Westville Pub, which helped pave the way for the now lively Haywood Road entertainment district.
“Generally, the more people that you bring, the more opportunities there are for all of us in the community,” she said.

The Isis opened Dec. 27, 1937, joining such other Asheville cinemas as the Plaza on Pack Square and the Imperial on Patton Avenue. Costing $50,000 to build, the Isis had all the luxuries of the day — air conditioning, a Western Electronic “Microphonic” sound and a carpeted auditorium “attractively decorated and appointed,” the Asheville Times reported at the time.
The first feature was “Varsity Show” with Dick Powell and Fred Waring and his Pennsylvanians.
But by 1957, movie theaters were battling TV for America's attention, and the Isis faded to black with barely a whimper in the papers. The building found new use and more recently was home to Pastabilities restaurant.
Woody, originally from Gastonia, lived in Atlanta for 30 years, working as a veterinarian. He bought the Isis property 11 years ago.
“We have felt for years that West Asheville will be a destination point,” he said. While the economy has been rocky in recent years, “some people would say that's a good time to get your feet wet and begin a project,” he said.