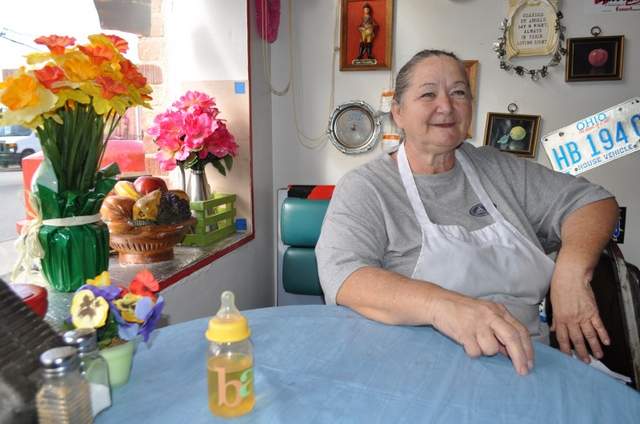 From downtown, Clingman offers the quickest shot into much of West Asheville. Start climbing at The Grey Eagle music hall, and you're on Haywood. Look to the left, where the land slopes to the French Broad River, and you see the Wedge Building, a wedge-shaped enclave of artists' studios and the Wedge Brewing Co. Look to the right, and you'll see a tall building containing a greenhouse of artistic exploration and expression — Flood Gallery Fine Art Center — and, beneath, Blue Ridge Biofuels.
On the far side of the RiverLink/West Asheville bridge is The Burger Bar, an institution long before West Asheville became a destination. As Haywood Road goes up the hill, it passes several old neighborhoods along Riverview Drive, Wamboldt Avenue and Beverly Road that make West Asheville such a desirable place to live.
But really, this isn't the stretch of Haywood Road you think of when people say “West Asheville.” You think of central Haywood, where the West End Bakery and Westville Pub are.
“We're Haywood Road in name, but that's about it,” Boyd Guthrie said at the elbow bend at the top of Haywood. He owns Guthrie's PC Service, one of the businesses there.
“The section we're on, near the river,” he said, “there's not much except a few businesses. There's not a lot of walking traffic like you see on other parts of Haywood Road.
“You go half a mile up the road, it's more like a downtown street, where there are businesses right beside each other and people walking back and forth.”
“Most of the businesses on this end have been here for a long time,” said Ron Greene, branch manager of Clegg's Termite & Pest Control. The majority of privately driven redevelopment on Haywood Road is happening on the other side of I-240, he said.
But business is good for Clegg's, he said — bugs still eat through houses, and people still want to stop them. But it doesn't look so good for other businesses nearby. Graffiti and concertina wire cover many of the buildings there. As Guthrie said, this isn't the part of West Asheville people talk about when they talk about West Asheville's renaissance.

Mama doesn't care. She's doing all right at her restaurant, Mama's Fast Foods, a Haywood Road attraction for 18 years. Home of the $6.99 Monster Burger (double cheeseburger with bacon and fries), Mama's stays busy, Mama (also known as Nancy Cunningham) said recently.
“People like my food,” she said in a corner table at the restaurant, as husband James Cunningham sat nearby playing with grandson, John. Though she said parking isn't as good here as it is on the other end of Haywood, people are a bit nicer. Many patrons are older people who live in the neighborhood, which doesn't seem to have attracted the younger owners that other parts of West Asheville have.
Doesn't matter. All are welcome at Mama's.
“We treat 'em like family,” James Cunningham said. “Without them, you wouldn't have a job.”
“You take care of people, and people will take care of you,” Mama said. “People keep coming back. I guess that's why I've been here so long.”
Down the street, Teresa Smith was having Mexican mocha with cayenne at Izzy's, a Wi-Fi coffee lounge that owner Amber Arthur created out of an old house. While jazz played over the house system, Smith was reading a newspaper, about to walk down Haywood Road to apply for a job at Harvest Records, near her apartment behind the Westville Pub. What with Orbit DVD, West End Bakery and Beauty Parade, her part of Haywood Road gets all the press. But she's hot on West West Asheville right now. “That area has just boomed in the last couple of months,” said Smith, a neighborhood resident for eight years. “Why go downtown and have to park on a Saturday night when you can walk in West Asheville?

One reason is to hear music. The Rocket Club, a Haywood Road music venue, closed in July, leaving a big gap in live music. That may or may not be filled by The Isis, a restaurant, bar and listening room nearby in the space formerly occupied by the restaurant Pastabilities.
Beside the old Rocket Club is McKnight Tire and General Repair, a low-slung concrete building that makes up the semi-visible part of West Asheville — small service businesses that aren't noticeable unless you need them.
Jeff Mast, putting rotors on a car at McKnight Tire, said he's seeing a lot more people walking along Haywood Road, a fact he attributes to the economy for opposing reasons — people are walking instead of driving, and because they are, they have more walking-around money.
And, in a sign that the economy is picking up, they're holding on to their cars longer, he said. McKnight Tire has so much repair business that “I can't get caught up,” Mast said. “I'm tickled.”
Across Haywood Road was the other side of the economy — Richard Santos and Taylor “Spills” Spillmann, waiting for the downtown bus. Sitting on the curb in front of The Admiral, a bar with a highly regarded kitchen, they were talking about the new hybrid buses the city bus system uses.
Spillman, who works as a delivery man for Jimmy John's Gourmet Sandwiches downtown, was hoping the bus would be able to take his bicycle. But both bike slots on the bus were full, so as Santos boarded, he hopped on his bicycle and zoomed off.

Rosanne Kiely, the market's co-owner, knows villages. She grew up on Long Island and agrees with Jennings that West Asheville, centered around Haywood Road, really has a village vibe.
“I hear that from people, that they don't have to leave the neighborhood,” she said.
Travis Williams lives in one, but it's at the other end, in East West Asheville.
He was walking to the West Asheville Library on a chilly Tuesday morning recently, a knit cap pulled tightly over his head. He and his wife moved here from Oregon.
Between them, they have one car, and since she works in Polk County and he's a photographer, she drives and he walks.
Which Williams doesn't mind. He loves hoofing it to the library. Haywood Road, with its constant parade of lives and livelihoods, is one of the things he loves about West Asheville.
“I don't go downtown unless there's a show,” he said.
“Why would I need to? I've got everything, all I need, over here.”