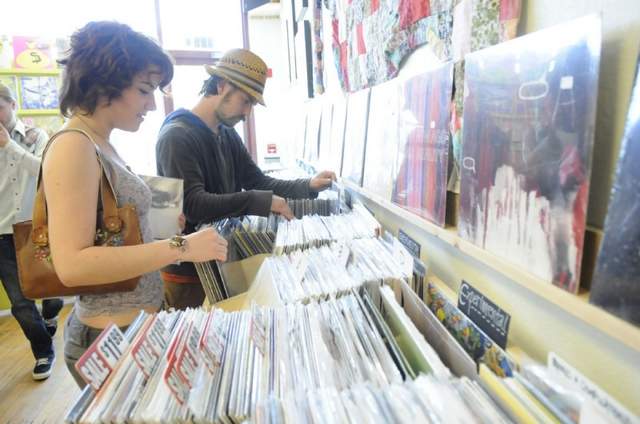 During the last 10 years, the West Asheville business district has grown rapidly, introducing many thriving stores and restaurants, according to longtime area business owners. Joey Cain and Lane Read, whose graphic design business Image 420 opened in 1995, said the changes have positively affected the community. “It's been a lot better all the way around,” Read said. “It's nice to have different businesses (like) Harvest around — and different legitimate businesses, places you can go and actually sit and eat.”

Harvest Records, which opened in August 2004, recently expanded its store into the adjacent business space. The record store supplies new and used vinyl and CDs, and sells and promotes local shows.

“A lot of buildings have been refurbished and renovated on Haywood Road, and a lot of businesses that have been here for a long time have moved away or closed down, and a lot of new businesses have come in,” Cathy Cleary, who opened West End Bakery in March 2001, said.
Cleary said the district has taken on a different feel since the beginning years of her business.

“I have about seven other bakeries that pick up their flour here at my bakery,” Cleary said. “They would typically be my competitors, but we have a spirit of collaboration.”

Both of the Image 420 owners agree that a sense of cooperation exists among the various businesses.

Cleary also said many of the West Asheville businesses offer barter agreements to other stores, letting each other use goods and services for free or a reduced price.

“We are good friends with most of the other business owners,” Cleary said.

“It just kind of works together, and everybody knows everybody, and we kind of look out for each other,” Read said.

“It's a community,” Cain added.

An Asheville landmark since the late '70s, The Hop ice cream shop became one of the newest members of the business community, opening its West Asheville location in October.

Co-owner Greg Garrison said the chance for expansion came as a building lease offer by the previous owner of the property, which was then the Two Spoons ice cream shop.“(The owner) was looking to lease out the space for the wintertime, and we live in West Asheville as well,” Garrison said. “So, we kind of knew the scene, and it was nice to be able to think about it.”

Garrison said he presented the idea for another ice cream store to the owner, who loved it. Garrison said the community was very receptive of the store's expansion onto Haywood Road.

“Ever since we've gotten here, the response has been fantastic from all the other business owners,” Garrison said. “They've been very welcoming and wanting to collaborate, which is always good.”