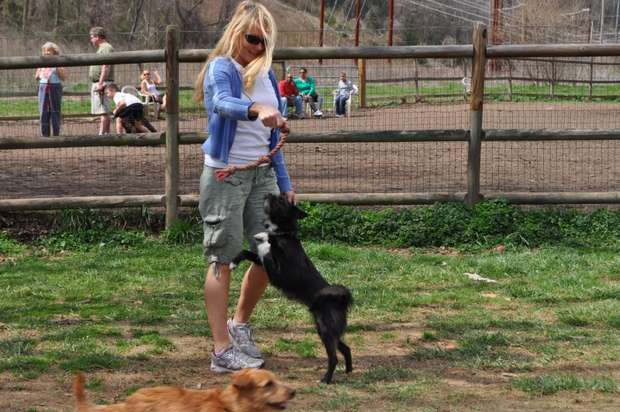 West Asheville has gone to the dogs — in a good way.

The seemingly endless parade of pups and their humans up and down Haywood Road on any given day isn't an accident, according to many residents and business owners of the tight-knit community.
Just build outdoor seating, and they will come.
Which is why, on a warm evening, half of the patrons at Westville Pub are of the four-legged variety.
“Our back porch is kind of notorious for impromptu jam sessions,” said Scott Stewart, pub employee. “People playing Bob Dylan or bluegrass, and lots of people singing, harmonicas and banjos, and the dogs running around — I think it's great.”
Asheville Village Grooming's owner Linda Litrell thinks its West Asheville's small-town feel and access to parks and hiking trails that encourages people to bring dogs outdoors.
The warm weather usually draws walkers or runners and their pups to Carrier Park or the dog park at French Broad River Park, both of which present dog owners with plenty of space away from heavy pedestrian traffic, which could overwhelm some pups.
Litrell can't imagine a West Asheville without dogs. She gets a kick out of seeing people “park” their pups outside while they run inside a local business.
“It's OK with everybody,” she said. “A lot of things just kind of revolve around the dog because people like to walk them all the time. On any given hour of the day you will see people walk them down Haywood Road.”
The dog-friendly environment, too, brings added benefits to pups, according to Jason Lydic, co-owner of You Work I'll Play dog day care and training.
“It is key early on for the dog to get it socialized and to get it used to other dogs,” Lydic said.
With its sidewalks and slower traffic, some say Haywood Road rivals only downtown for “walkability.”
Even people who don't live in West Asheville understand that canine friends are part of the West Asheville scene, points out Jane Mitchell, owner of Miss Jane's Pet Sitting.
If there is outdoor dining, it's a safe bet Fido will be welcome with open arms by customers and employees alike, she said. Mitchell has seen outdoor spaces at restaurants on Haywood Road full of people and dogs alike, although she points out that the key to all interactions between humans and their canine friends are manners.
“As long as you have a leash on your dog, generally people are pretty good, and I would say it's friendlier than most,” Mitchell said.