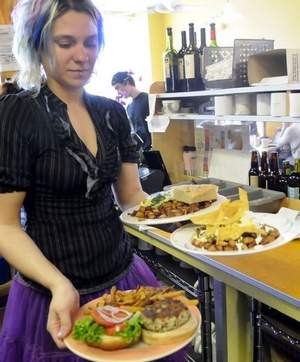 WEST ASHEVILLE — Who says you can't fit a quality renaissance into a decade? Whoever said it, West Asheville is proving them wrong.
The area once deemed “worst Asheville” is now an oasis of eclectic eateries and poppin' pubs. But as most West Ashevilleans who have inhabited the urban village for more than 10 years or so know, it wasn't always such a funky and fabulous place to live.
Hip and historic, creative and casual, edgy and elegant, West Asheville is building its recent rep as the Asheville area to watch.

You'd be hard-pressed to find a fiercer proponent of West Asheville pride than West End Bakery co-owner Krista Stearns. One of modern West Asheville's founding mothers, Stearns helped spur the westside renaissance renovation of the old Bledsoe building on Haywood Road in 2001, which now houses the area's signature Westville Pub and West Village Market and Deli.“People would actually come and watch us through the windows as we were renovating,” said Stearns of the bakery, which will celebrate its 10th anniversary this year. “That's how excited they were that something was happening in this neighborhood. We were all that excited.”

It's all in the 'hood

While the hole-in-the wall bars, funky consignment shops and whimsical dining spots may give West Asheville its tourist-drawing charm, Safi Mahaba, a West Asheville resident and co-founder of the Burton Street Community Peace Gardens on Bryant Street, said it's the neighborhoods that make the area worth settling into.
“People don't want to live here just for the restaurants and shops,” Mahaba said. “You can get that downtown. It's the feeling of being a part of a neighborhood that draws people here. You can walk down the street and actually have a conversation with people. There are a lot of front porches in West Asheville — literally and figuratively.”
The Peace Gardens will celebrate its ninth season of growing and community fellowship this year with a few exciting changes in the works.
Mahaba hopes to take the Gardens' first season of produce to market this year and will be installing a new Wintergreen hoop house across the street so garden veggies can flourish all year round.
The Peace Gardens hold weekly workdays from 10 a.m. to noon Saturdays — and the likelihood of scoring some homemade pizza from the on-site clay oven is always high.
Of the five ZIP codes in Asheville, 28806 has the largest number of households (14,011), the highest density per household (2.33 people), nearly the lowest percentage of one-member households (29.7 percent) and, outside of downtown Asheville, the highest percentage of female-headed households with no husband present (13.5 percent).
Thirty-five percent of the homes are renter-occupied, according to demographics from the Asheville Area Chamber of Commerce. Eight percent are vacant.
DeWayne Barton, Mahaba's husband and partner in the Peace Gardens' success, works hard to protect the lifelong residents of West Asheville from rising housing costs in the area. Barton has had family in West Asheville for more than 100 years.
Stearns said the soon-to-be bakery even received an anonymous $100 donation during construction, with a note thanking the owners for taking a chance on West Asheville.
“There was so much of a community energy here, with a whole lot of people who wanted to make this neighborhood something more,” Stearns said. “It was definitely a gamble, setting up a business in this area, but we had as much grass-roots support as anyone could ask for.”
And as almost any West Ashevillean will tell you, that gamble paid off. The pioneering of the Bledsoe building became a cornerstone for a business corridor that would spread like wildfire. Now boasting more than 30 eateries, watering holes and a diverse set of retail personalities, West Asheville's got it going on.
From the great grub at the Westville Pub to a booty-shaking good time at The Admiral's Saturday night dance party, West Asheville's signature dives are still holding strong.
“There are a lot of folks in this area who have been around here for generations, and we just want to make sure no one gets priced out of their community. I think we're doing a good job of melding the old and new, but it's important we stay focused on reaching out to people and staying tight-knit.”

As excited as Stearns is to see West Asheville thrive, she is one of many westsiders who hope the growth will stay under control.
“So far I think we've struck a really fantastic balance of growth without gentrification,” she said. “We've been able to maintain that bohemian culture that a lot of areas lose when they become more polished and popularized. As long as we can keep evolving without that bad G-word, growth is good.”
Rob Seven, a Candler resident and one of Asheville's most-recognizable kooky characters (you may know him as the guy driving the wildly decorated Art Ambulance through the Mardi Gras Parade and Lexington Avenue Arts Festival), said he hopes the edgy charm that makes West Asheville the hot spot it is today won't disappear with popularity.
“Right now West Asheville is one of the best places in the Southeast as far as being able to walk to what you want, but it still has a real raw, funky feel to it,” said Seven, who painted the unmistakable Pineapple Jack's car — a veritable mascot of Haywood Road.
“When the downtown area started to cater to tourism more and more, it lost some of that edginess that West Asheville has going on, so you almost have to hope it won't get too much bigger,” he said.
City planner Alan Glines agreed that growth needs to stay balanced.
“When you look at Merrimon Avenue, for example, the makeup is actually very similar and has a lot of the same features as Haywood Road,” Glines explained.
“But the scale — the size and speed of the road — makes it a lot less walkable and works against it. We just have to make sure Haywood stays at a scale that keeps it functional.”
In an appropriately off-center metaphor for the future of the 28806, Seven likens West Asheville to his favorite tropical fruit.
“Each one of the eyes on a pineapple is actually an individual fruit,” Seven explained.
“They're all separate pieces, but they grow together to make this one beautiful, unified piece of fruit every time. That's what this community should be like, growing all together.”